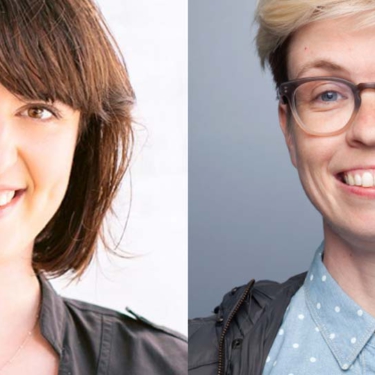 Julia Zeltser is a founding partner and creative director at Hyperakt, a social impact design studio in NYC. With over 15 years of design experience in print, brand development, data visualizations, and interactive media, Julia has been instrumental in establishing Hyperakt’s visual voice. Julia leads a multi-disciplinary team of designers in a wide range of assignments. She has advised clients such as ACLU, Ford Foundation, and UNICEF to extend their brand in print and interactive media. Julia initiated and leads Lunch Talks at Hyperakt: a monthly event to ignite collaboration and idea-sharing among the design community. Julia has received accolades from organizations such as Society of Illustrators, Communication Arts, Brand New, and How Magazine for her design work. She was born in Ukraine and graduated from Parsons The New School of Design in New York. She lives with her husband, Lenny, and her two kids, in Brooklyn.

Sarah Lidgus is a designer and writer whose work explores opportunities for empathy within large, complicated systems—and then designs moments of humanity back in. A former design lead at IDEO’s New York studio and a fellow in the inaugural class of IDEO.org, Sarah’s work has managed to span industries from fashion to philanthropy. Favorite projects have tackled in-home sanitation in Ghana, flood preparation in New York, and dog treat deployment across offices worldwide. Sarah’s work has won some IDSA awards, and her writing has been published in print and online magazines such as I.D., Surface, and salon.com. She teaches in the Non-Profit Management at the University of Pennsylvania, and in the Products of Design MFA program at the School of Visual Arts. She lives with her dog Dolly in New York City.

Joe Marianek is a multidisciplinary designer, educator and creative director. Prior to co-founding Small Stuff, a design studio, Marianek lead projects with Apple’s global design group in California and was an Associate Partner at Pentagram in New York. He is a graduate of the Rhode Island School of Design and was named a “Young Gun” by the Art Directors Club. Marianek has served on the board of AIGA Rhode Island and has lectured and judged internationally. Since 2007, he has taught courses in typography and graphic design at the School of Visual Arts.