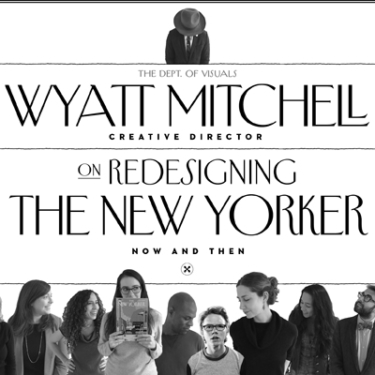 THE NEW YORKER: NOW AND THEN

THE NEW YORKER: NOW AND THEN

The graphic needs of a magazine and more notably its ‘brand’ are by necessity different than those of 20, 30 years ago. Since its inception in 1925, The New Yorker remains the preeminent magazine of culture, criticism, fiction, profile writing and long form journalism. For the complex content hierarchies and varied platforms that mark today’s publishing landscape, The New Yorker’s Creative Director, Wyatt Mitchell has lead the magazine’s most significant design changes since its founding.

With an attentive allegiance to aesthetic, this revitalization of the printed magazine and its visual tradition, brings new life to its digital counterparts, and has sharpened the brand that unites them all—while carefully cultivating its continued legacy.

In his presentation, he will discuss the challenges and triumphs of refreshing The New Yorkers’s visual vocabulary and expanding it beyond its print origins. The discussion will cover the history that inspired the update of The New Yorker’s signature typeface Irvin, the introduction of Neutraface to the magazine’s pages and the recent design refresh of the Goings On About Town section. Additionally, he will discuss the introduction of new artists to the magazine including staff photographer Pari Dukovic.

WYATT MITCHELL
Wyatt Mitchell was named The New Yorker’s first Creative Director in 2011, charged with overseeing all design and visuals for the print, web and digital platforms. Prior to arriving at The New Yorker, Mr. Mitchell served as Design Director for the Conde Nast Editorial Development Group. From 2007 to 2010 he served as Design Director at Wired Magazine, where he was part of the award winning team that garnered 3 consecutive design ASMEs and SPD ‘Magazine of the Year’ titles. Mr. Mitchell has a broad range of magazine experience, from Design to Production to Digital Initiatives. Wyatt has formerly held titles at O, The Oprah Magazine, VIBE, Esquire, Details and TV Guide. He has received over 70 national design and editorial awards from groups such as the American Society of Magazine Editors, Society of Publication Designers, Print Magazine and Communication Arts.