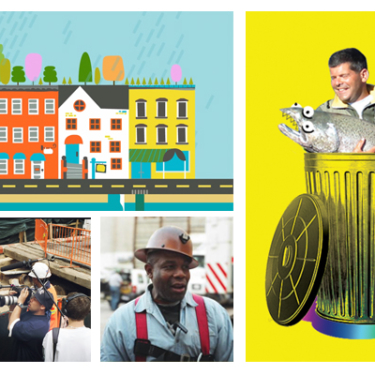 NOT WATERED DOWN: A SCREENING & DISCUSSION WITH CUP

NOT WATERED DOWN: A SCREENING & DISCUSSION WITH CUP

A lot of things are hidden under the streets of New York City, one of which is an immense grid of water pipes that feed and move the water through this great city. Whether it be the water we drink, put out fires with, or the water that carries away all the nasty stuff we produce. Where does the water go? On March 13, join us for a very special screening and discussion of “The Water Underground,” a video produced by public high school students with the help of CUP which has screened in classrooms, environmental organizations, juvenile detention centers, and film festivals across the country. Valeria Mogilevich, the Program Director and Christine Gaspar, Executive Director at the Center for Urban Pedagogy (CUP) will discuss the process and challenges of making this video. Spend an evening with us and let us show you where the water goes.

The Center for Urban Pedagogy (CUP) is a New York-based nonprofit whose mission is to use art and design to improve public participation in shaping the built environment. CUP partners with designers and community organizations to create visually-based educational tools that help demystify complex issues from zoning law to sewage infrastructure. The projects are designed with and for advocacy organizations to help increase their capacity to mobilize their constituents on important urban issues. CUP’s print, audio, video, and media projects, along with tactile interactive workshop tools, are in use by dozens of community organizers and tens of thousands of individuals in New York City and beyond. The projects have been featured in art and design contexts such as the Cooper-Hewitt Museum’s National Design Triennial, PS1, and the Venice Biennale. CUP has also been featured in such publications as Print, Metropolis, and GOOD Magazine; and in 2012 received the Curry Stone Design Prize. For more information, visit welcometoCUP.org

Valeria Mogilevich is the Program Director at the Center for Urban Pedagogy (CUP). She has over six years experience creating experiential youth education projects that demystify the city’s complex systems. These projects have been featured in such venues as the Netherlands Architecture Institute and MoMA and such publications as City Limits, The New York Times, and Design Observer. She has presented on project-based learning and design for social change at the New Museum, the BMW Guggenheim Lab, NYU’s Steinhardt School, The Cooper-Hewitt, Pratt Institute, and Parsons. She received her Bachelor of Arts from Brown University in Modern Culture and Media.

Christine Gaspar is Executive Director of the Center for Urban Pedagogy, where she partners with designers and community organizations to create visually-based educational tools that help demystify complex issues from zoning law to sewage infrastructure. Christine has over ten years of experience in community design. Prior to joining CUP, she was Assistant Director of the Gulf Coast Community Design Studio in Mississippi, where she provided architectural design and urban planning services to low-income communities recovering from Hurricane Katrina. She holds Masters in Architecture and in City Planning from MIT, and a Bachelor of Arts from Brown University. She is currently teaching in the Design & Urban Ecologies program at Parsons The New School for Design.