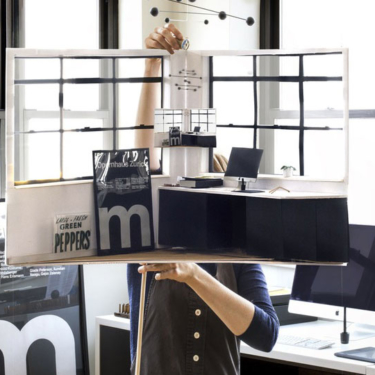 While friction in high-tech experiences connotes poor design, in the analog realm, friction is how our materials talk back to us. When we feel the resistance of a push or gauge distance with an echo, we use physical intuition to interpret feedback from the world around us. Logically, this type of lo-fi reasoning guides studio practice in art and craft-based fields.

However, using strategies like origami, technology labs are also seeking ways to make complex problems tangible—to open then up to physical intuition. We may universally think best when we think with our hands. By engaging abstractions in this manner, designers can find surprising possibilities for projects hidden in plain view.


Kelli Anderson is an artist, designer, and tinkerer curious to find surprising possibilities hiding in plain view. As an Adobe Creative Resident, she is spending a year exploring how design can tap into invisible forces at play in the world by building functional contraptions out of paper. In the Spring, she will release her first book, This Book is a Planetarium, a pop-up book of interactive objects—including a speaker, spiralgraph, planetarium, musical instrument, perpetual calendar, and decoder ring which demonstrates the connection between design and science.

Kelli is known for her work for NPR, The New Yorker, Wired, The New York Times, and The American Museum of Natural History — as well as her redesign of brands such as Russ & Daughters, momofuku and Munchery. She once made a paper record player wedding invitation and a counterfeit NY Times newspaper from the utopian future (a 2008 group project with the Yes Men, for which they won the Ars Electronica Award.)