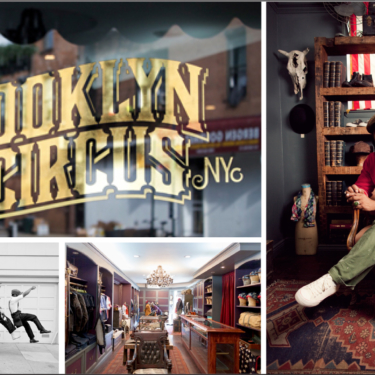 Inspiration comes from many places, and for Ouigi Theodore, aka “The Bearded Man”, Creative Director and Founder of the apparel and life style brand The Brooklyn Circus, vision arrived from the influences of a formative childhood growing up in 80’s Brooklyn—The Jamaican rude boys, barber shop culture, Haitian communities, Hasidic Jewish communities, pizza shops, ice cream trucks in the summer, the Brooklyn Museum and of course Spike Lee’s movies set in the gritty Brooklyn of the recent past. As specific as these memories are, the brand’s sited influences are broad: African American history, American vintage sportswear, graphic design, photography, travel and The Cosby Show—to name a few—all play a key role in the beautifully executed comprehensive brand experience activated seamlessly at every touchpoint.

Today, Brooklyn has become a world-wide phenomenon and its revitalization has established the borough as a major hub for creativity. Indeed its culture is being exported around the globe daily. The Brooklyn Circus is a slice of the original Brooklyn, transcending trend to authenticity by creating with the past & future in mind.

OUIGI THEODORE
Founder of The Brooklyn Circus, one of the most influential retail concepts in the USA, graphic designer, social media specialist, cultural connecter and lead-curator, Ouigi Theodore is an overall visionary. He holds a Bachelor of Arts degree from Stony Brook University and is an alumni of the Advertising Design program at the Fashion Institute of Technology. His passion lies in evolving the image of Urban America through his love of design, process & natural decay. Ouigi has managed to garner a global following and respected accolades ranging from the who’s who of fashion, to music and design. Labelled “The Bearded Dandy of Brooklyn” by The New York Times, & equal part “Artist, Rebel & Dandy” by the RISD MUSEUM, he continues to appear across the globe with The Brooklyn Circus to not only expand his vision for the brand as much as for his sense of style.

THE BROOKLYN CIRCUS
The Brooklyn Circus story begins in 2006 in the quaint neighborhood of Boerum Hill Brooklyn, with the aim to strengthen consumers’ appreciation for classic aesthetics and antique motifs whilst upholding the pillars of modern design within a 100 Year Plan. With time-tested values of classic American craftsmanship, a love for urban tradition, vintage sensibilities, and an endless search for the timeless silhouette. The BKc has produced garments that bring the past forward into the future while extending an ethos of education, empowerment and authenticity. Founded by graphic designer Ouigi Theodore and developed by an arsenal of visionaries fueled by a common purpose, this bustling junction of style and character is always an experience. Beyond embracing techniques of timeless craftsmanship and sophisticated simplicity, The BKc fosters creative relationships, providing a social sanctuary for open-minded forward-thinkers. Every cuff of trouser, roll of the sleeves, and peaking pocket square is connected to a greater story, as they’ve succeeded at tailoring not only cloth and fabric, but lifestyles. With a second flagship in San Francisco & distribution in over 20 countries, The BKc’s inspirational clout has solidified its cult following which has grown exponentially and globally.

JULIAN ALEXANDER
Julian is a Grammy Award-winning art director and the proprietor of Slang Inc., a Brooklyn-based design studio that specializes in visual imagery for some of today’s most notable artists and organizations.